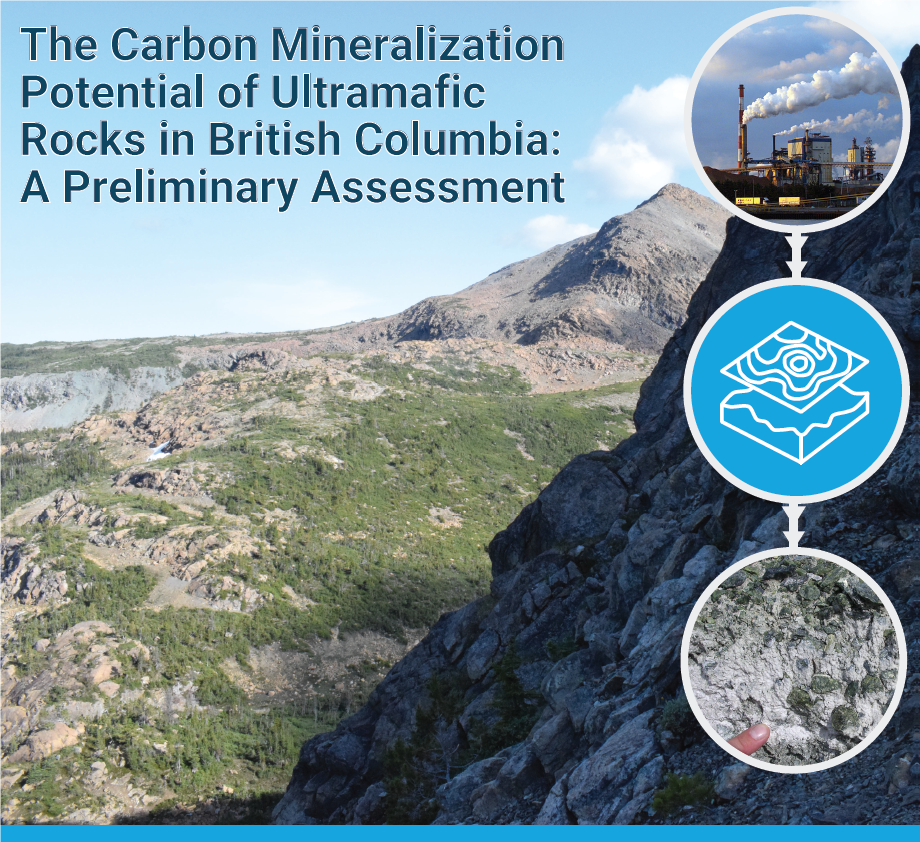 ABSTRACT
British Columbia contains extensive volumes of ultramafic rock that can sequester carbon dioxide (CO2) into solid magnesium carbonate minerals to mitigate greenhouse gas (GHG) emissions. Serpentinites, altered hydrated ultramafic rocks, are of particular interest because they can be highly reactive to carbon dioxide at Earth’s surface conditions. Serpentinites have distinct magnetic and density properties relative to their unaltered ultramafic protoliths such that they should be identifiable from airborne geophysical surveys. The Carbon Mineralization Potential Project for British Columbia (CaMP-BC) assesses the abundance, location, shape, and areal extent of serpentinized ultramafic rocks in B.C. using existing geological, geochemical, and geophysical data. Preliminary results are reported here. Roughly 46% of the ultramafic rock bodies in B.C. are associated with large magnetic anomalies consistent with extensive serpentinization. The volume of serpentinites in the upper 1 km of the crust in British Columbia is estimated to be 1,000 km³. Sequestration of CO2 within these rocks will require one of two processes, ex-situ carbon mineralization where serpentinite is mined and exposed to CO2 or in-situ carbon mineralization where CO2 is injected underground. Serpentinite is known to host some of British Columbia’s largest nickel deposits and the extraction and crushing of such rocks during mining will unlock their reactivity for ex-situ carbon mineralization. The loosely bound and readily leachable magnesium that could be used for ex-situ carbon mineralization has an estimated sequestration capacity of 56 Gt CO2; this represents more than 800 years of GHG emissions in B.C. at current rates. The use of reactive serpentinite tailings from nickel mining as a carbon sink has the potential to make nickel mining carbon neutral or a net carbon sink. Nickel is a critical commodity for decarbonization of the energy and transport sectors. The development of critical metal mines with a high capacity for carbon dioxide mineralization represents an opportunity to decarbonize supply chains for renewable energy and reduce the greenhouse gas footprint of resource development in British Columbia.